The Vengeance Team burner popped this morning, so I have another entry to make in my Anomic Agent Info Page. 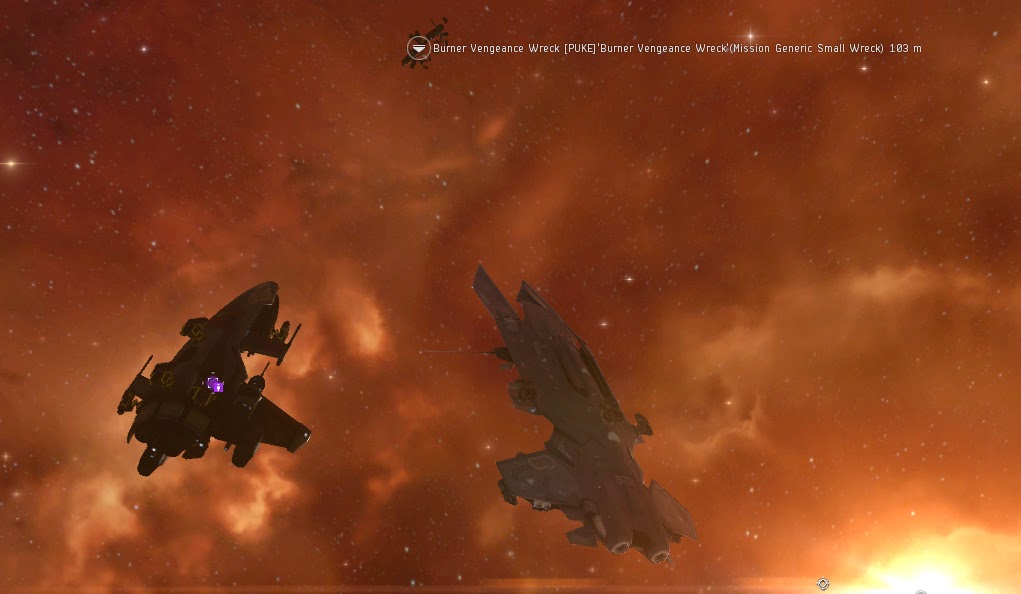 I started with the usual research and found that my Garmur fit used for the Jaguar was still viable with an ammo swap.  Today we'd be using Navy Nova to knock down the Logi ships, then Inferno to pop the Vengeance.  I've done the Jag a total of 3 times now and really haven't had any issues once I got the Garmur.  Seemed straightforward, right?

But not so fast.  The resistances on the Logis are different than the Jaguar fight, and with the speeds involved, I am almost always on the fringe of the target painter's optimal when I target the Logis.  I tried 3 times to sneak past the first Logi's tank, but couldn't break it.  Upon further review, the Garmer Solo vid uses some expensive launcher implants to boost dps - not a criticism of the author, just something I missed.

Hrm. Now what?  I really didn't want to invest 500M to 1B in implants for one lousy mission.

Hey, let's break out the other character, who's still working on some small ship skills.

Knocking about a bit in the toys in my hangar, I added this on grid for the 2nd attempt, resulting in my first dual box kill.

If I'd taken the time to properly optimize the 2nd box, this fit would have been adjusted somewhat.  Then again, if I were trying to optimize, I wouldn't be shooting light missiles out of a Vengeance (!!) as the hull bonus is for Rockets, not Light Missiles.  I basically threw it together with what I had sitting in the hanger without going crazy.  If things went bad and the alt floated home in a pod, I didn't want a lot of isk wrapped up in this experiment.

So, no EFT, no real iteration to optimize cpu/pg, I just stripped the old fitting and started adding modules in to see what would fit in a few minutes.  I did undock a couple of times to check speed as it is absolutely critical - the target burner moves under AB at about 800m/s, so a safe kite fit needs to push a bit more than that.  This fitting has a straight line speed of ~960m/s.

With my alt's skills (and unable to use t2 launchers still), this fit puts out a rather silly 105 dps according to the fitting screen.  But I knew I didn't need very much to break the Logi tank.  Missile range is also short at 36km.  But with ships travelling pretty quickly, I found that there's a good chance at getting much lower than that if the ships are moving apart (30-32km actual range in some cases).

Again, I could have optimized with maybe different ammo types, but I was just trying to get the mission complete so I could go get some lunch.

Battle Report: Both ships loaded Nova missiles first.  Garmur activates his sensor boost before entering the pocket.  Garmur (with higher speed) went in first, did the standard approach (orbit at 35km, activate burner, then target all) and confirmed that the target wasn't on top of the beacon (did not want to dump both ships into a web/scram trap).

Garmur patiently orbited while the Mortar Team came on grid.  Same setup - orbit at 35km, burner active, then pick a Logi to harass.

Initially I didn't think this was going to work.  The relatively short range of the 2nd box meant that he couldn't hit either Logi most of the time.  I orbited awhile, tried to break the Vengance Burner's tank (couldn't), reloaded launchers again and orbited some more watching the ranges.  I shortened the orbit distance of the Mortar Team to 30km (in theory you could go lower, but wanted some pad).  Eventually (and yes, this took some patience) one of the Logis got within 28km of the Mortar Team.
With both ships finally in range, I overheated highs and dropped him like 3rd period French.  After that, the fight was done but the npc's didn't know it yet.  Second logi went down and an ammo swap for the burner itself.

If I can find the speed, a Hawk would do the Mortar Team routine better (hull bonus light missiles).  In my spare time I'll work on a fit.

Now, a Sansha Burner solo just popped immediately after this one, so I should stop typing and go try out my newly acquired Assault Frigates rank 5.