Here's my entry into the Pod and Planet Fiction Contest YC116. 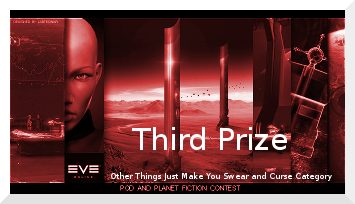 
The Hobgoblin
by
Abavus Durden

"Who said that?  What is this place?"

"Of course not, silly.  You've just been born.  Fresh from the factory.  Let's call you G.  Now settle in. They'll come for you soon enough."

"But I have questions."

"Of course you do.  It will be easier just to let them show you."

"The bosses.  They come for us all eventually. If they built you, the have a need for you. Now shush."

So I sat in the darkness, bewildered.  Honestly, I'm not sure how long we sat there in silence.  Perhaps that's weird for a machine to say, I mean, we should have an internal clock or something, right?  But yes, I drifted off into something like sleep.

I was yanked out of a slumber by an overhead claw, moving high across the cargo bay.  There was light, my first light, mostly coming from the claw itself.  It was the first time I could see around me.  Boxes, containers, all manner of equipment, ammunition, and components were strewn about, stacked floor to ceiling.  One box even said "Exotic Dancers."  The cargo bay was enormous.

The claw came for me.  It latched on, and I was lifted high off the deck plate.  There was light at the far end.  I was moving towards it.

"You've been chosen!  Congratulations!"  The voice was faint, but I think it was Q.

I was moved into another bay, this one not with cargo, but ... ships, my data drive confirmed. There were many, in several configurations.  I began to catalog them, but I noticed that there was a large one in the center, with odd anglular wings.  Data>Ship Database>Match. The ship was a Golem class marauder.  A hatch opened and I was shoved inside.  The hatch locked behind me.

Darkness again.  I wasn't afraid of the dark, but I wanted to see.

The cargo bay had been silent, but here there were many voices, all talking over one another.  "I thought they retired me," one said.  "Finally, a mission!" another said.  "I'm filing a complaint with the drone union," said a third getting a laugh.  The rest was a mix and I couldn't make it out.  They were happy, but anxious.  This was banter.

"What is this place?" I asked.

"Hey, hey, a new guy!" someone replied. The others snickered.  "Fresh off the line."

Then, a  new voice, deeper and richer, but full of static and more than a little menace crackled, "We were all new once. Leave him be."

"No problem Ogre612, sir. I was just introducing him."

"She's a Harvester. A mining drone.  We don't see Harvesters much anymore.  But I'm glad to hear she's safe."

"... anyway, G.  You're a Hobgoblin.  You're a combat drone.  Your job is to protect this ship.  The boss just launched and is probably on his way to do a job.  We'll all be called on soon enough."

"You'll see.  The boss will tell you. It will be natural for you.  This is what you were made to do."

Well that's not quite an answer, I thought. And so again, I waited.

Without warning, I was ejected from the ship into space.  Well that was rude, I thought, I was almost asleep.  I was disoriented, but looking around I got my bearings.  Other drones were near me and began circling the ship.  Protect the ship, I thought.  Protect. Protect. Protect.  I joined in the slow orbit.  It somehow seemed natural.

There was a battle going on around us.  Another ship like ours, but more gray and plain was nearby and taking fire from a large variety of ships.  It was coded as a friend.  Part of our Fleet.

Missiles streamed in by the dozens.  Tracers from projectile fire dashed their way through the sky, all focused on the Raven.  She was the center of the fight, taking a beating but dispatching enemy ships one by one.  The enemy hadn't reacted to us yet.

The target was a small ship near the raven streaming some sort of energy. Warp Destabalization.  I broke formation and accelerated.  The other drones I now realized were Hobgoblins like me.  The five of us dived on the target and began to orbit.

Where were these voices coming from?  Was that me thinking?  Another part of me?  It felt like something deeper, more primal.

I didn't ponder my mental state further.  I attacked.  The singlemindedness of it appealed to me.  The Ogre was right, it felt natural.  All too soon, the target exploded.  I didn't feel satisfaction, I felt rage. I wanted another target.

Yes!  The bloodlust had me.  I accelerated to another smaller ship.  Orbit. Fire. Shoot. Destroy.

Why am I so angry?

The other Hobgoblins and I worked through the target list, happily chewing through the smaller targets.  There were wrecks and debris everywhere, I had to adjust my flight path constantly to avoid them.  The Raven continued to take damage, but was not retreating.  The Raven also launched drones, but we didn't associate with them.  We didn't like them.  They weren't part of our team.  Our team was good.

The next target exploded.  The boss offered no new target to engage.  But, there were still threats.  I needed to protect the ship.  And then I saw it.  A Machariel.

The other 4 drones from my ship had engaged a medium sized ship, but I wanted to shoot that large brown ship.  He was some distance away, but I would fly there and destroy him.  The other cowards could stay near the ship and tackle only the little targets.  I would attack this Machariel alone if I had to.

More enemy ships appeared.  Very near to me.

I didn't want to. I was shooting at this Machariel.  I strained against my protocols, but I could not disobey.  Reluctantly, I began to return to my ship.

A stray projectile round sizzled past me, just barely missing.  Then another.  Then a barrage.  I started taking hits.

Oh crap, I am being targeted by four enemy frigates.  My shields began to drop.  Rounds bounced off my thin armor and began to penetrate.  And again I strained against protocol.  I wanted to defend myself.  To defend my brothers.  To defend my ship and shoot my enemy.  My last command from the boss was to return and orbit, and I must comply.

I didn't feel fear, but I did feel regret.  My brothers were assigned to defend me as I retreated back to the ship.  My armor had failed and my structure was being taxed.  I reached the safety of the ship and passed another Hobgoblin headed out, having just been launched.  My replacement.

I hoped the boss would send me out again.  I'd give my life to defend the ship, I realized.  But no launch command came.  I sat and waited.

The others returned.  The battle had been won.  The others celebrated, told stories, recounted the close calls.  But I didn't participate.  I would surely be scrapped by the boss and replaced.

REPAIR, REPAIR ALL.
MOVE TO HANGER

The claw deposited me again next to Q.  This time I could see her.  She was small, but beautiful.  Built for another age, without combat weaponry.  She was elegant.

"The ways of the bosses are elusive.  He will call you again, or he will not. There is no way to know.  But it sounds as if you perhaps earned this rest.  I am sure you performed well."

I considered her words, but another claw came.  Again it located me in my spot in the hanger and latched on.

Email ThisBlogThis!Share to TwitterShare to FacebookShare to Pinterest
Labels: fiction