I am a Statistic

I haven't done it yet, but I'm about to fail my first burner mission.  I'll become a statistic in Fozzie's chart - missions failed.

I promised to keep better count of how many lvl4's it took me to pull a burner.  This time it was five successful lvl4's and one decline, 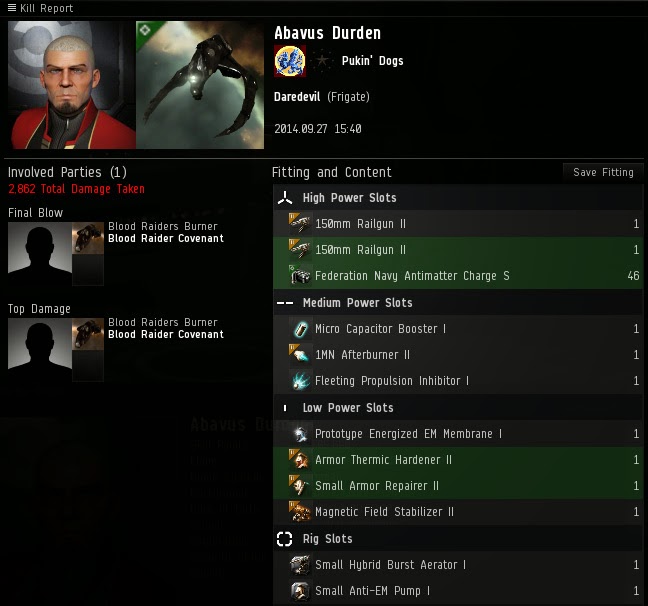 I drew the Blood Raider (Cruor) burner.  Did my usual research and found that I lacked some necessary skills.  Most guys are doing the Blood Raider with a Wolf.  I'm Minmatar-deficient, and oddly enough, Abavus is not t2 capable for autocannons.


Aha! I thought, I don't need to solo him, although that's the macho thing to do ... I can dual box and keep my lvl4 LP flowing.  So I grabbed the Vengeance that I had just used for the Angel burner, adjusted the fit a little bit (missile dmg type, different armor resist, dropped to 1x web and added a target painter and a cap booster).

I then cloned the setup and handed it to my alt, with minor fitting differences where she couldn't handle tech2 stuff (rigs and launchers).

I had Mrs. Durden pilot the alt on the laptop (she's not currently an active player, but played in beta with me and flew a Domi until a few years ago).  After some practice killing some belt rats, we were good to go.

Scratch two Vengeances.  Oops.  DPS was fine, but I had a glaring hole in the resists.  Or something.  Still not sure what happened.  We were just very quickly sitting in two pods while the Cruor orbited us like a big jerk.

The next morning, I decided to throw money at the problem and bought a Daredevil.  Watched youtube kills a few times.  I thought I understood the strategy.

Misclicked about 30 seconds into the fight.  In 11 years in EVE, this is the first time I've used a Cap Booster.  The mechanics are alien to me.  Cap went dead and I lost my afterburner.  I saw the error immediately but it was too late; all I could do was swear at the monitor.  Cruor closed on me and I stayed in NOS range.  Dead Daredevil.

"Don't Suck" is effectively the lesson learned on the Daredevil loss.

This one mission has racked up about 200M isk in losses so far.  I could perhaps tank up the Vengeance fit and give it another go, but I don't know if it's worth another 35-75M isk in dead hulls right now.  I'm tempted to punt him, let me go back to regular lvl4s while my small autocannon skills come up.

PS:  This isn't an "omg burners are too hard" post.  I'm trying to figure out the puzzle.

Email ThisBlogThis!Share to TwitterShare to FacebookShare to Pinterest
Labels: burners