Through the Eyes of a Noob

It's been a long, long while since I helped a real life friend through his first evening in EVE, but I was able to last night.

One of my best friends surprised me and sought out the EVE client without any prodding from me, created an account and logged in.  I knew he was vaguely interested after my tales from EVE Vegas, but my surprise when he said he was getting the client was genuine.

He was almost through the character generation process when his internet died and he had to start over.  At that point he (jokingly) sent me a comment about having the hard part out of the way.  I replied with the infamous EVE Learning Curve chart, but I don't think it scared him much. 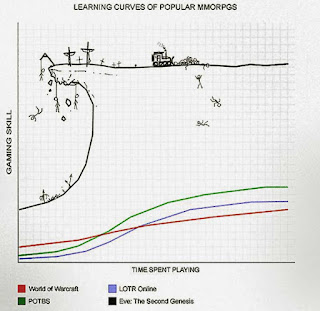 He rolled Gallente, and once he was ingame, I made my way to Cistuvaert to say hello.  He was part way through the first few tutorial steps, but undocked and met me at the gate.

Gah. I hadn't thought that far.  What do you do with a 20 minute old character sitting in his shiny noobship?  The player behind the keyboard is one of the smartest guys I know, but he's got no context for EVE, has no idea where anything is in the UI, and was barely able to undock and find me.

So I did two things.  I began to spam our convo channel with information, and got him into Sugar's public channel so he had help if I wasn't around.  Super high level instruction in terms of what EVE is and isn't; a conversation ensued about how I've chosen to play vs. how others play their particular game.  Topics included the market, system security status, gankers, the tutorial and SOE arc, and the fact that assets don't magically follow you through space (if you want it somewhere else, you gotta haul it).

Throughout this, I was answering questions.  Several times, things that are kneejerk muscle memory for me stumped him.  I'm effectively speaking multiplication and long division at him, and he is still at 3+3=6.  At one point we chatted for awhile before realizing he'd minimized his overview and therefore didn't see ANY of the buttons I was described.  This isn't a reflection on him (he's one of the smartest guys I know), or me (I'm pretty smart too, hah), or even the game (it's all there, really), but without being able to see his screen so I could point and grunt in the right direction, he was really stumped.

The second thing I did was get him in a Fleet and jumped to the system next door.  Basic activity of navigation.  We warped around a bit, and I got him to use autopilot to get home.  Back in Cist, a Serpentis Hideout appeared on scan, so I warped in to begin clearing it.  He came in and assisted, playing with combat, basic maneuvering, and targeting.  This went better, and he killed and looted a few pretty smoothly.

With the evil Serpentis vanquished, it was time for me to think about bed.  I felt guilty leaving him to his own devices and the boring ol' tutorial, but in many ways it'll be far better than I am at some of the nuances.

I don't know if he'll stay past the trial period.  I'm sure his next session will go more smoothly.  But it's certainly been interesting to see the game through his eyes.