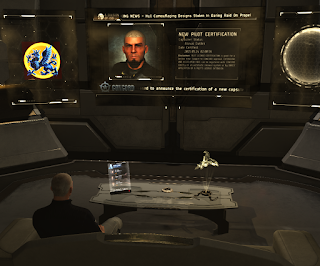 EVE has been occupying my idle moments lately.  That's good, and bad.  Well before the 85% post, I was pondering things, and dark thoughts flitted in and out of my head.  Upon close inspection, these thoughts would evaporate; I could not force them to congeal into a concise position.  But yet the feeling of unease lingered, and the comfort that I sought was elusive.  I've felt like I've been fighting a blanket that's too small on a cold winter night.  The cold keeps creeping back in.

And that's why, when Neville's 85% post hit, I jumped on it with both feet.

And yet, with time, that single post doesn't quite keep me warm at night either.

Oddly enough, it was mowing the lawn that I think has finally caused a breakthrough.  Mowing, me, and EVE go way back.  At the old house, in the summers of 2003 and 2004, I'd have to afk for an hour every Saturday so that I could go push the mower around our postage stamp in the subdivision.  During that hour, I'd hatch plans and create a mental map of all that I needed to do and all the folks I needed to contact when I returned to my comfortable chair.

Today, as regular readers know, we own 10 acres and I mow between 2 and 4 acres of it depending on the week.  Yesterday I was plotzing around on the Deere, and I happened to think of EVE in the early days, and those Saturdays long ago at the old address and how energizing that time was.  EVE was a central focus, mowing was a chore but a mental break (chainsaw therapy) that I needed to step back and look at the game strategically.

So, yesterday, I began thinking about the game in its infancy - May and June of 2003.  The feelings I had then for the game and the feelings I have today are so distinct that it feels like two very different game titles.  That's not to say one is better than the other - they're just different.  Imagine meeting your dad when he was in his 30s and interacting with him as a peer and contrast that to the father you know today in his 50s or 60s. These two individuals are the same man, but are probably very different people in terms of experience, intensity, interests, and perhaps even temperament/demeanor. Your own role as son/daughter vs. peer plays a role in how your interactions shape up - and that's similar in a way to how you approach EVE today as a returning bittervet or a noob undocking for the first time.  Your expectations and approach are different.

I think it's safe to say that the EVE of yesterday appeals to my soul better.  There's no way I can go back and relive those early days, so this is a moot thing to type about, but while the EVE of today is better in almost every way, I miss the crusty and simple aspects of the game of 2003.  I've known this for awhile, but on the mower I again realized that trying to recapture that feeling of the early days is what makes me continue to sub up.

Lately I've not been productive isk-wise or progress wise.  I've just been touring the highsec systems and regions and have been doing things more randomly; docking at different stations, visiting old systems, and just looking at the skeleton of the game that I know is still there.  I found my favored space-taxi (Amarr Navy Slicer) and popped through random gates without the shackles of using autopilot to plot my jump route.  I went to regions that I used to frequent as part of my trade routes and space trucker empire but no longer have a viable business need to visit.  I checked out some highsec citadels, visited some moons and asteroid belts, and looked at a sky that was Caldari blue.  I'd missed it.

The next 2 weeks are going to be a blur with work and Big Dumb Ride prep, but I'm hopeful that after the dust settles and summer takes hold, I'll be able to devote more time to investigate the EVE-that-was that's still within the EVE-that-is.